Looking For a New Solution?Off-The-Shelf Products

By Product Type
By Brand
About Simplicity AirServicesInnovationsNews/BlogContact
Back

Looking for a Climate solution for your vehicle? 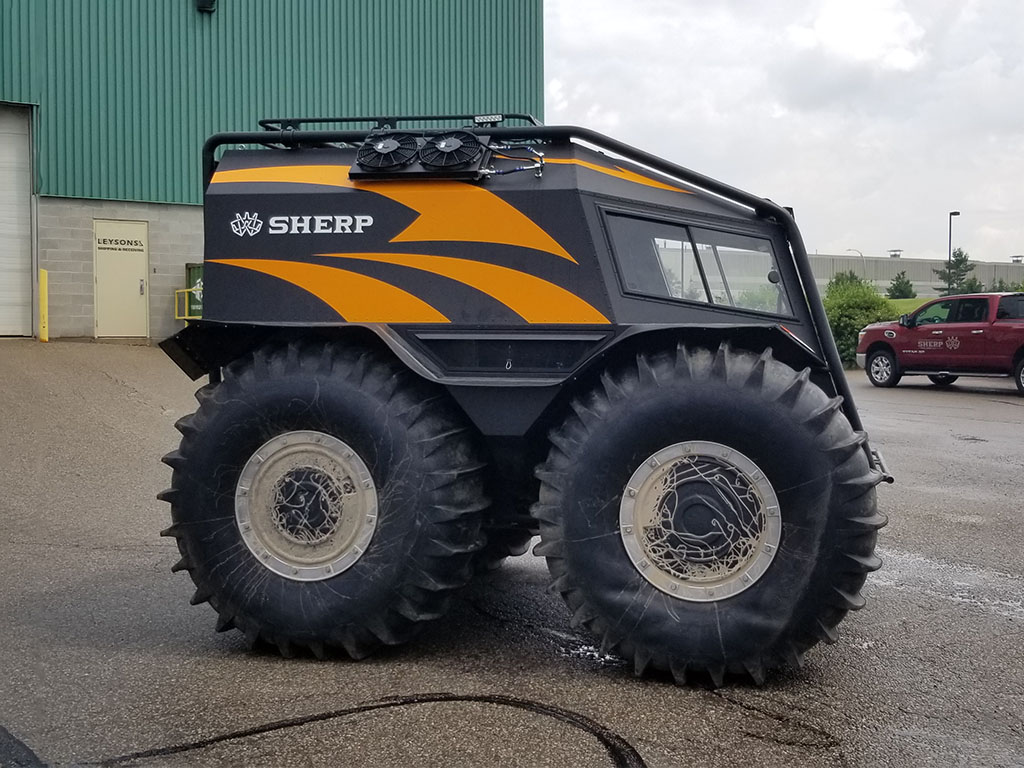 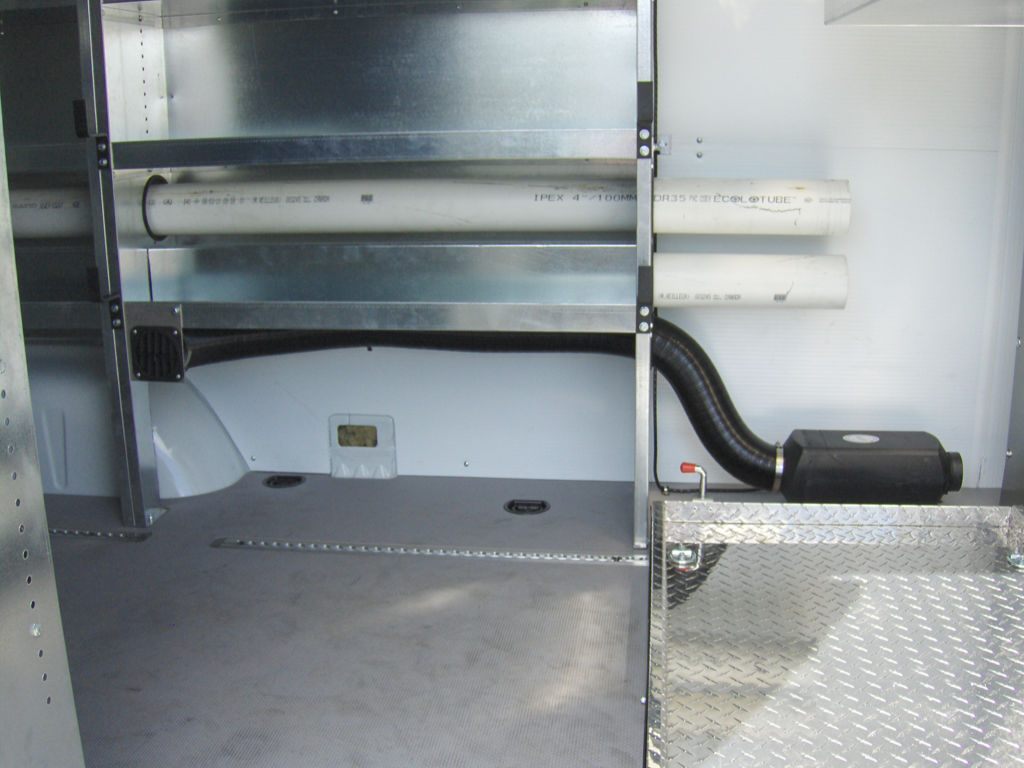 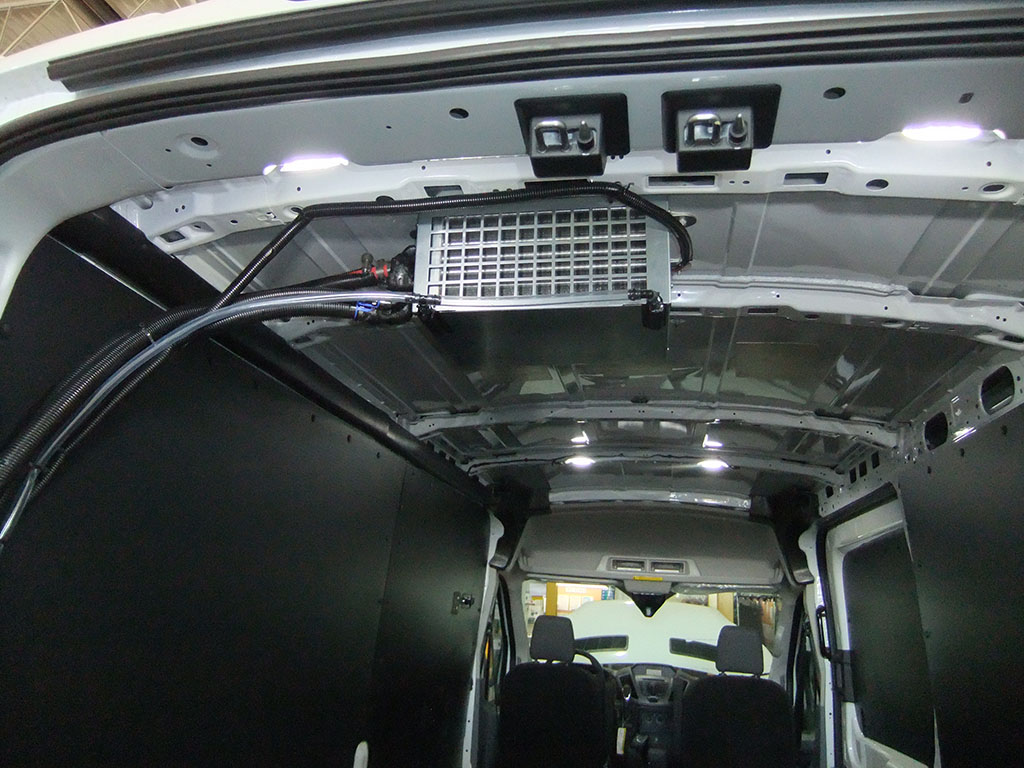 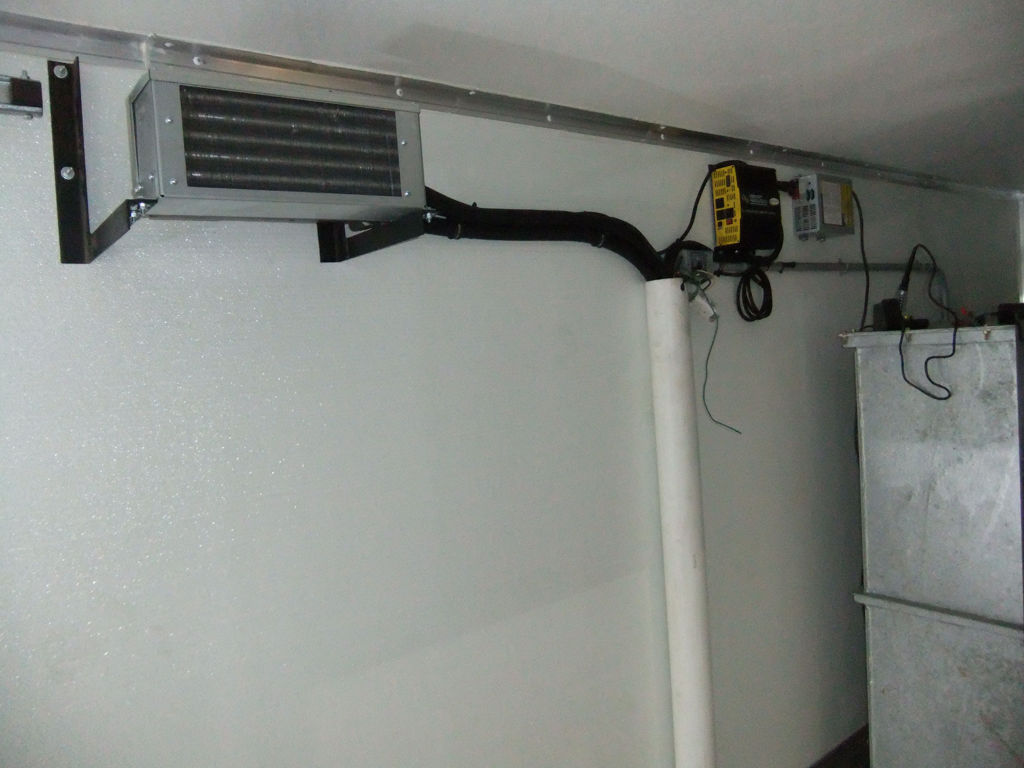 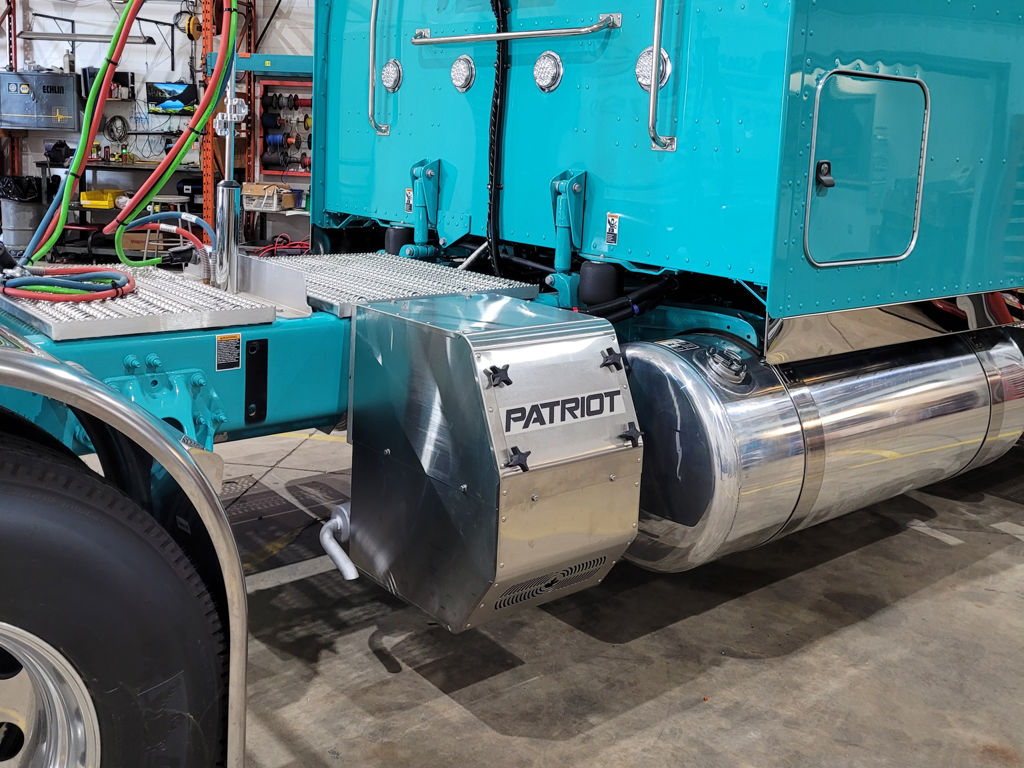 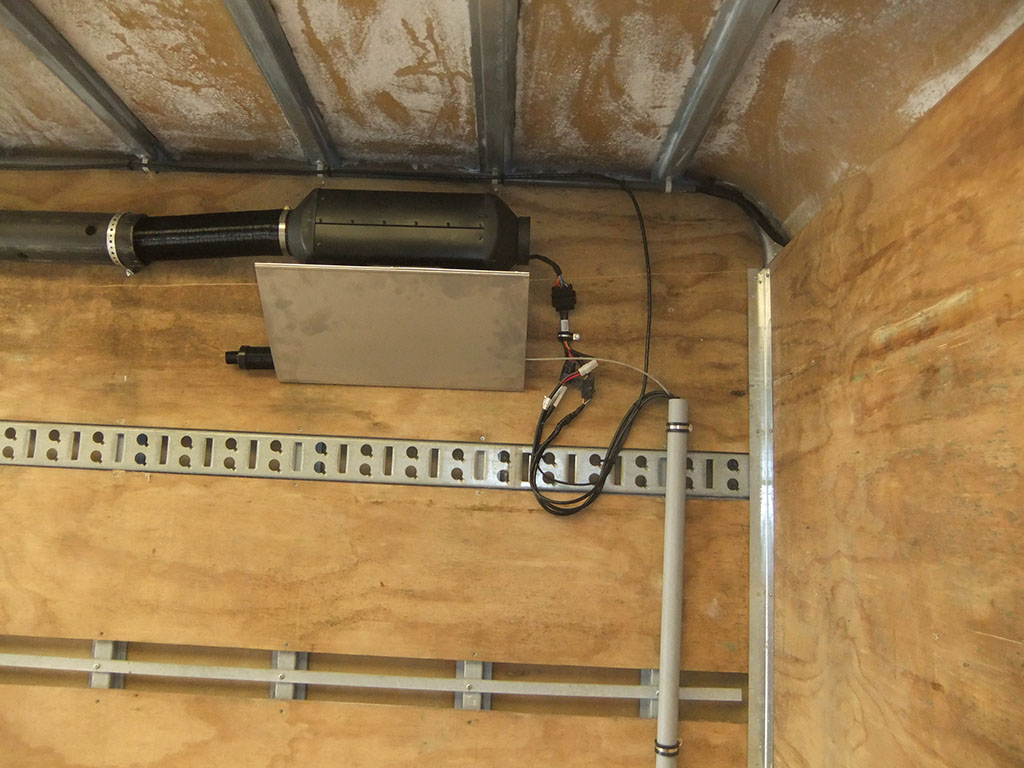 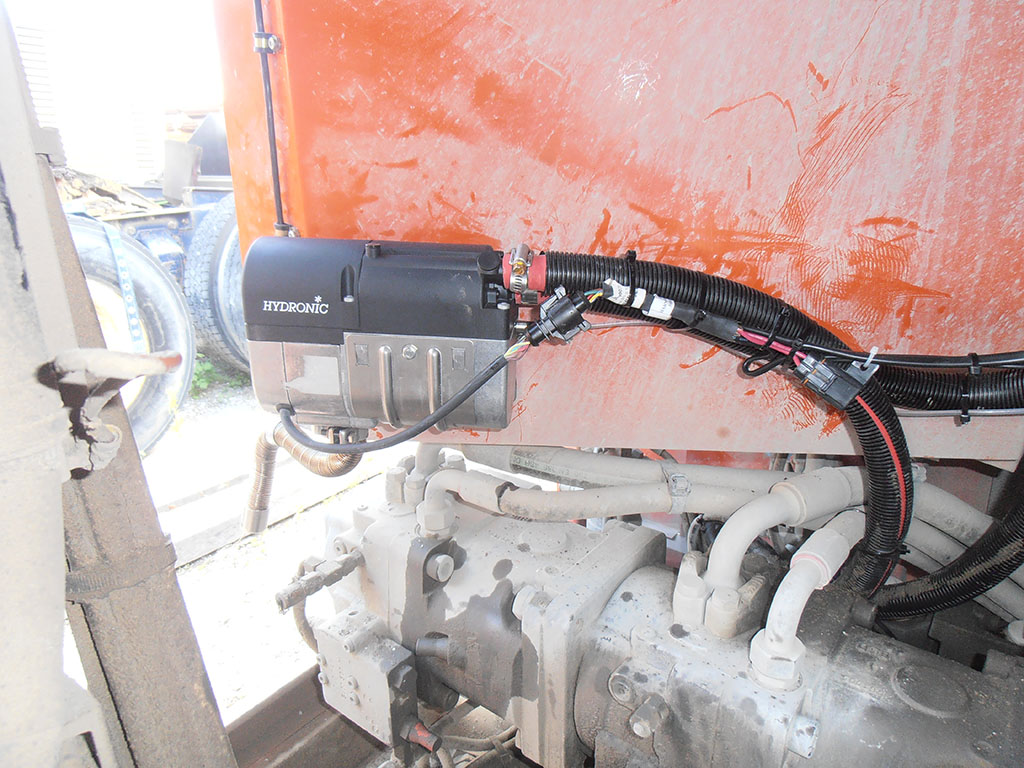 Integrated Solutions for Climate and Power

Simplicity Air Designs air conditioning systems for on and off road vehicles all of the time. Some examples of the vehicles we equip are: 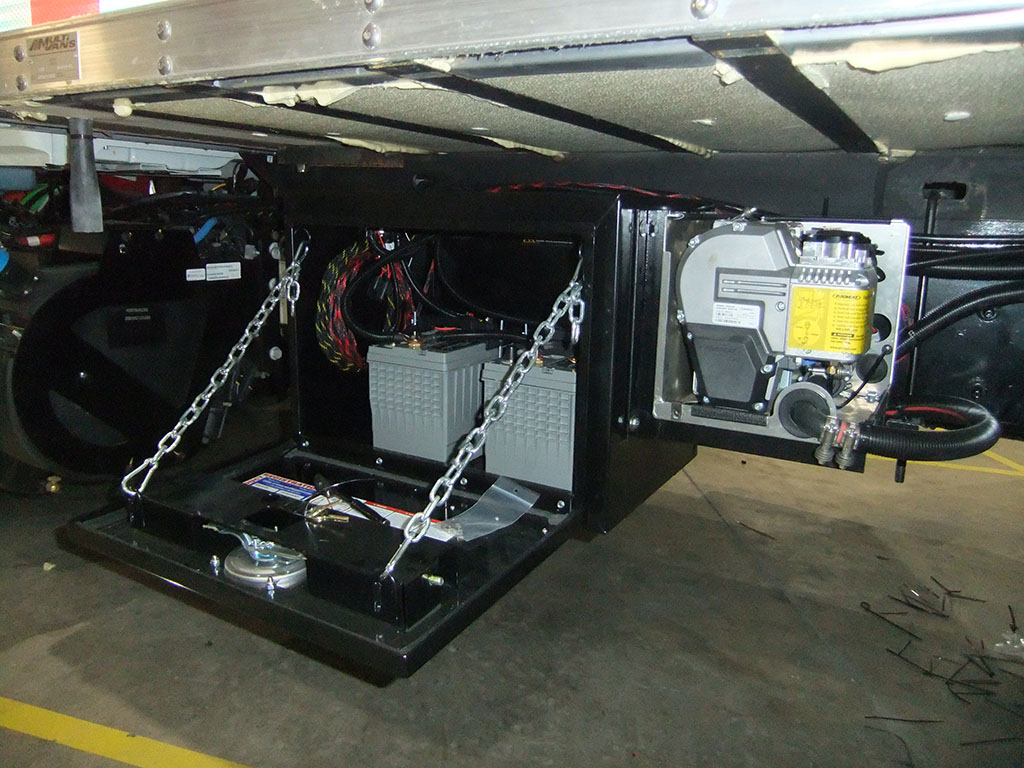 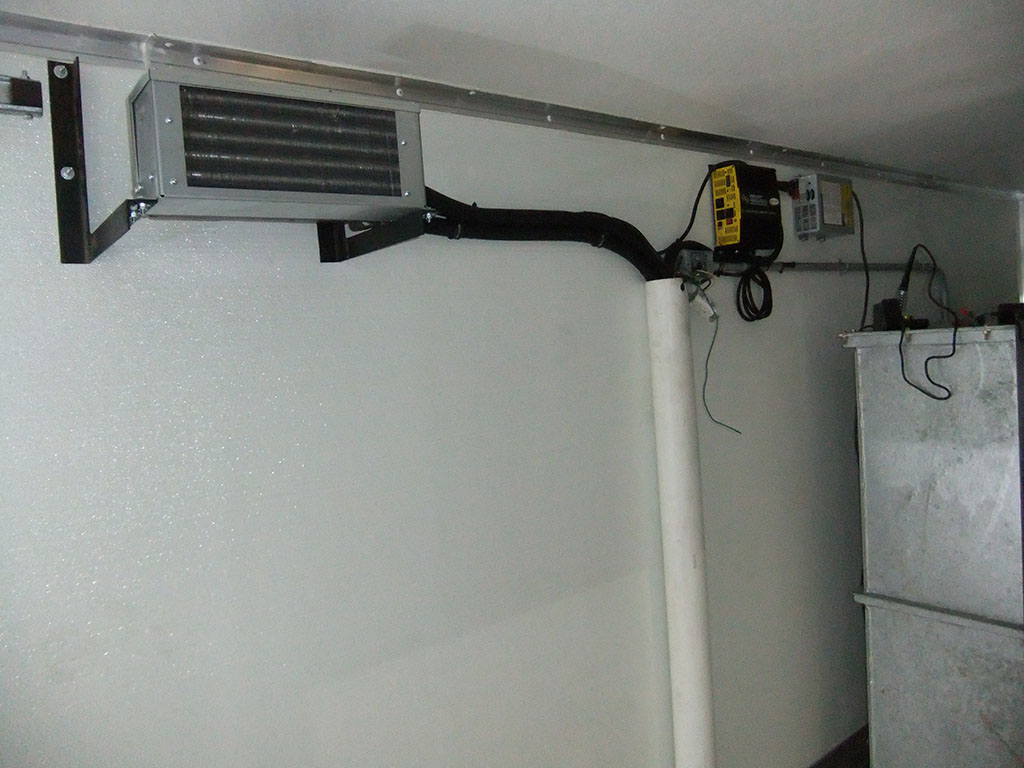 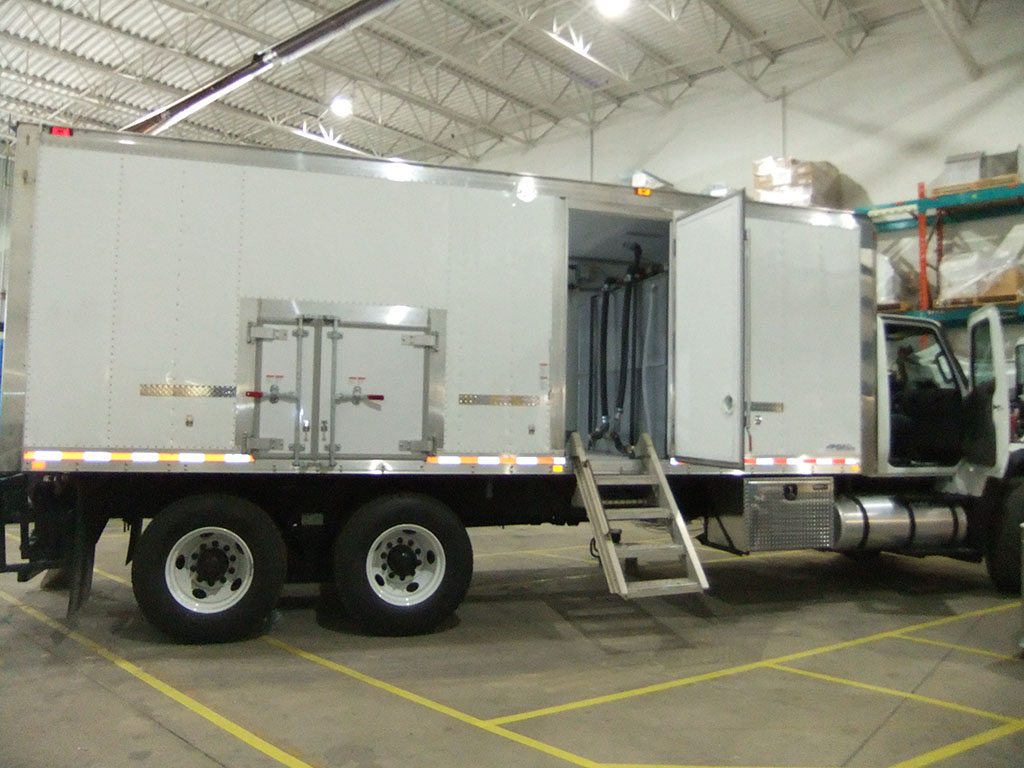 Directional Drilling trucks are used to carry water to mix “slip” which lubricates the drill bit. To keep water in the tank, the pumping equipment and water supply must be kept from freezing at all times. The operators would otherwise need to dump the water every day and fill up the tank every day. That loss of productivity has great value and therefore they need a reliable solution.

This vehicle is equipped with a Proheat X30 Fuel Fired heater, a 40,000 BTU heat exchanger to keep the back warm, additional batteries, inverter, shore power connection with battery charger and the GRIP Idle Management System to monitor the temp both in the cab and the Rear compartment of the vehicle.

Animal Control Vehicles have complex challenges to keep the animals cool or warm at all times however this means that the vehicle will idle extensively to do so while the operators of the vehicles, go from call to call at times or need to catch an animal at large. The vehicle also needs to have good ventilation to ensure that the animals have a constant supply of fresh air and oxygen when often the animals are in stress to find themselves inside of a vehicle.

This vehicle is the top-of-the-line solution for Simplicity Air using a complex CAN network of controls to ensure that the vehicle and system work fluidly and with the upmost reliability since lives are at stake.
The system consists of the GRIP Idle Management System with a Rear Facility Option to automatically operate and control the rear HVAC system while the vehicle is in service, the Optional DC air conditioning compressor to provide a/c for both the cab and rear facility when the vehicle is off, and a coolant pump to circulate hot coolant to the cab and the animal compartments.

The system also feeds in outside air through a pressurizer blower that climatizes and filters the outside air before it enters the animal compartments. It also includes a large battery pack for extended engine off times and a shore power connection to charge the batteries back while it sits overnight. The operator need not do anything – just set the temperature and forget it. 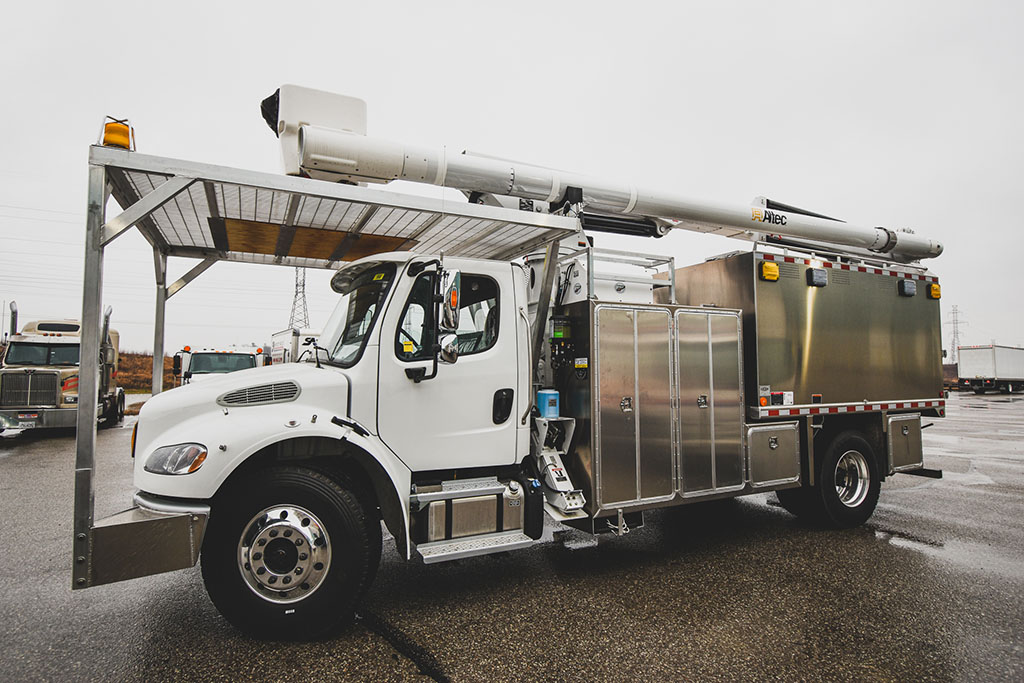 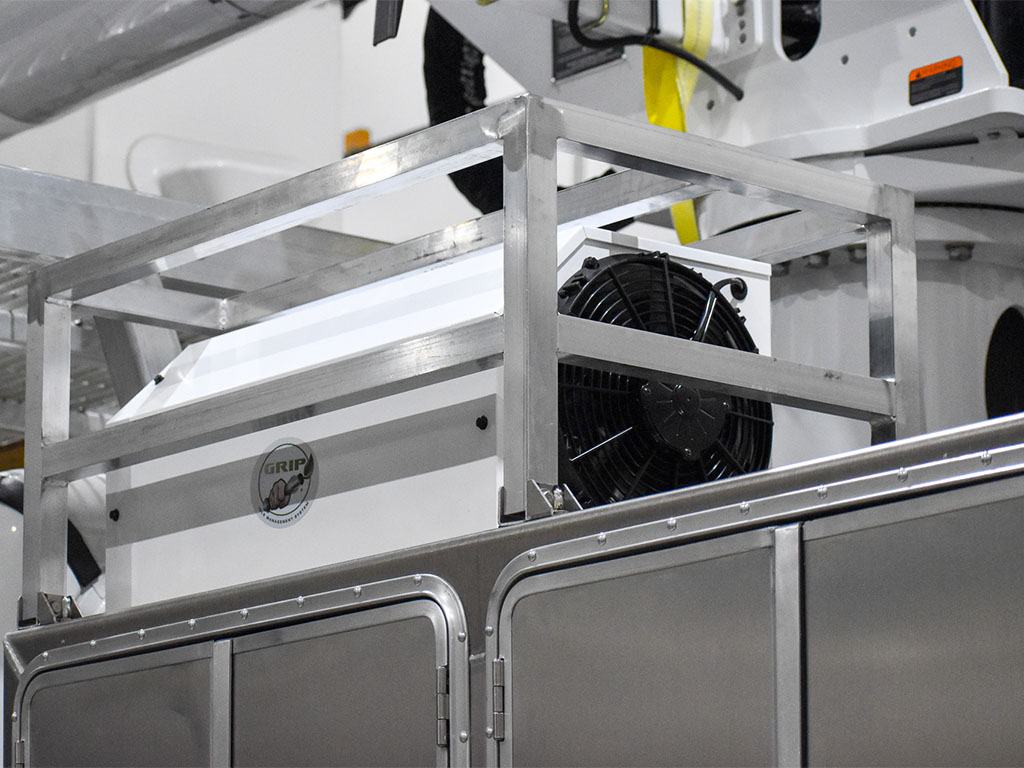 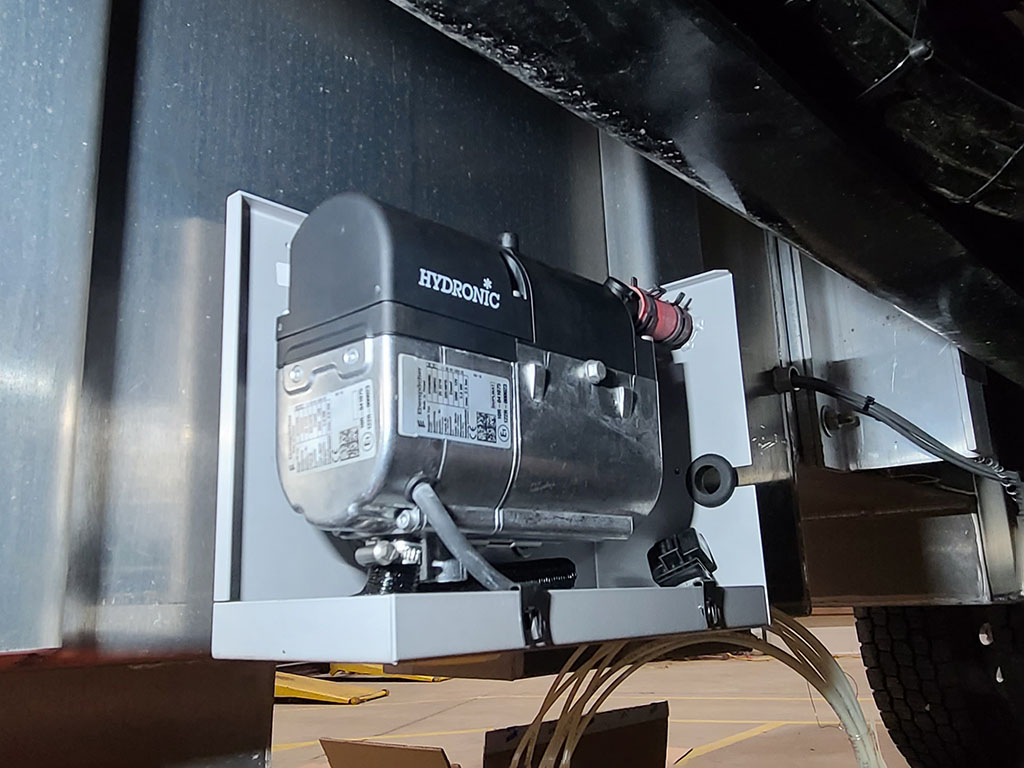 Utility Trucks can be used for several types of operations including line repairs, forestry and sign installation. While the engine typically needs to run while the work is being performed there is always allot of waiting time involved whether that’s to work out the job, get instructions or waiting for other operations to occur before the boom can be used.

In this application the focus is to maintain the cab heating and cooling while the operators wait, while the engine is off. For this system we integrated the GRIP Idle Management System to manage and control the idling while adding an Eberspaecher Hydronic 5 and the Optional DC Air Conditioning unit. We also upgraded the OEM batteries with Deep Cycle AGM batteries with both starting and deep cycle capabilities.

Trucking is a crucial service delivering basically everything – everywhere. That means that some products being delivered require specific temperatures and there are many types of climate control systems for the industry. One product, however, requires a unique process just to be able to unload it. Chocolate while hot is very fluid but let it reach room temperature and it starts to solidify making it impossible to unload from a tank. Typically steam can be used to heat the chocolate through pipes that travel through the tanker but its easier to maintain the temperature while its in transit to eliminate the need to use steam. This is done by connecting the hot coolant from the engine to circulate through the piping in the tank. Unfortunately, that means the engine can never shut off and at idle it may not produce enough heat.

With todays’ emissions systems on heavy duty trucks, its no longer just about the fuel while idling. The emissions control systems are a maintenance item which collects particulates that are unburnt from the combustion process. When the engine is idling, the engine temperature is low which means less of the elements in the fuel get burned off creating more particulate to be captured in the emissions system. The more idle removed, the less particulate and therefore less maintenance for the emissions system. The system we installed in this application is primarily the Patriot APU but there are some things about the unit and the install that differs from a regular APU. The system still provides heating and cooling for the sleeper, 110 Volt power for the sleeper and battery charging to maintain the battery levels on the vehicle. A unique feature of the Patriot APU allows us to get more heat from the APU than any other APU on the market.

These features include the fact that we sue an electric fan to cool the engine compartment that only comes on when the coolant temperature is hot in the engine, while others use an engine driven fan which cools the APU down even when you need the heat. It also has a second 110 Volt cord that can be plugged into a heat load such as an electric heater or block heater which not only adds the heat from the block heater but also creates more load on the engine creating more heat. The system includes two 3 way valves which allow the coolant to be directed to the tanker as well as the truck engine as required. It can also split the coolant to do both jobs as required. We tested the flow which provides twice what a Webasto 2010 does, and it has a higher temperature of 95oC. 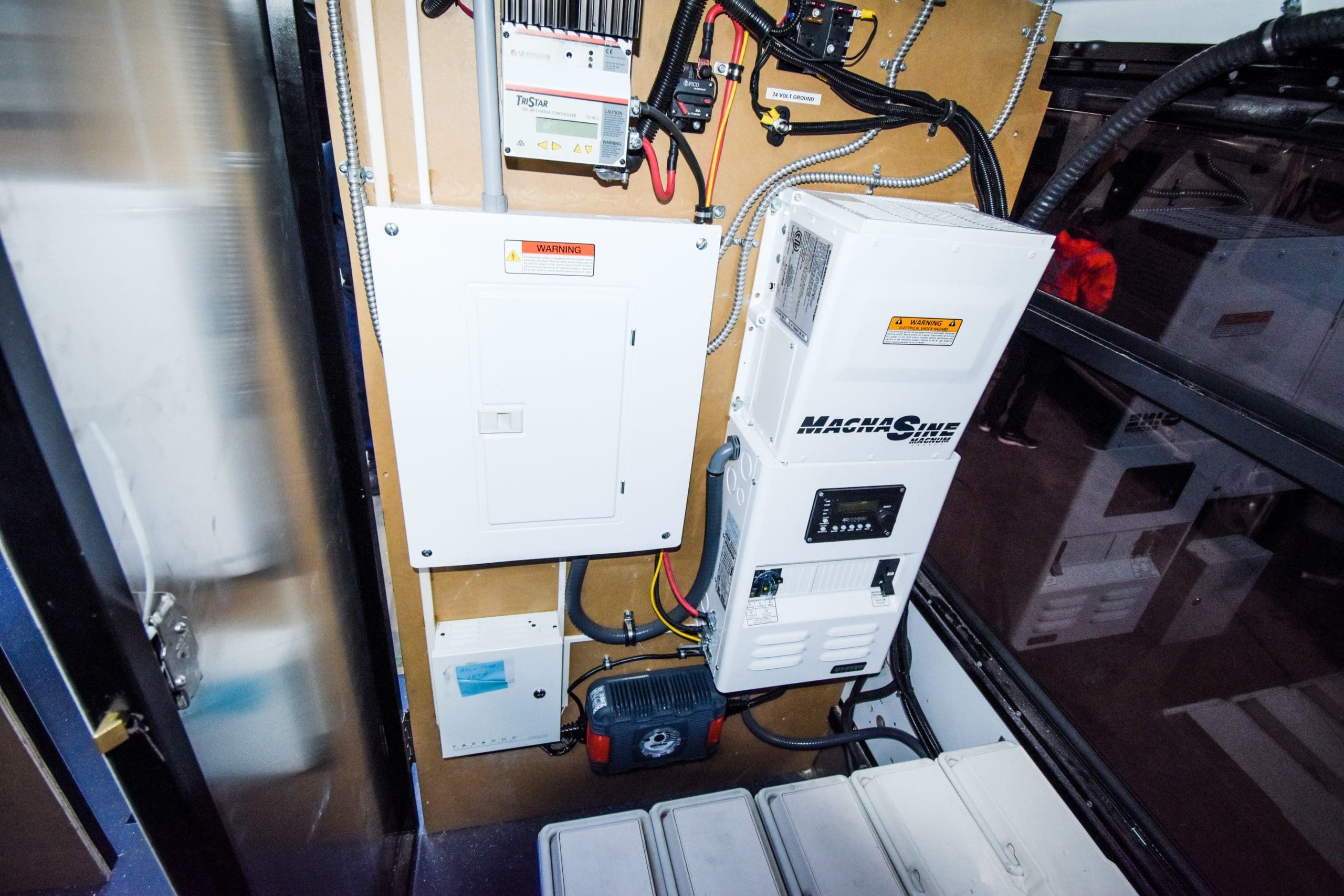 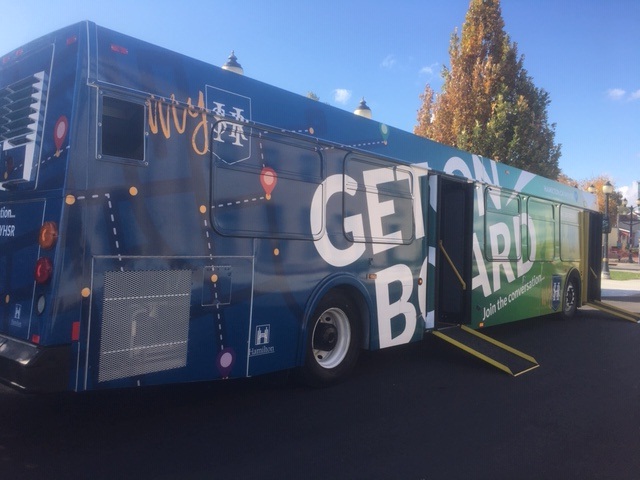 Early in 2019, the City of Hamilton Street and Rail HSR was looking to repurpose a retired bus from 2004. Typically, HSR buses have a life expectancy of 12 years and the HSR wanted to take this bus out to a public setting to educate and promote their services, thus bringing to life the HSR’s Consultation Bus!

The project started with just adding air conditioning, but soon after it became clear that the bus would need a complete power management system to operate their equipment remotely. This was an interesting project due to the magnitude of the energy required to sit at a venue all day to power loads and maintain the climate while keeping the bus’s engine off.

It started by adding two Dometic Air Conditioning units to the roof for air conditioning and heating. To operate all the loads, 10 - 480 Ahr batteries were added. Each of the batteries was equivalent to 5X the energy of a standard car battery (similar to 50 car batteries!). In order to charge these batteries, a 2000-watt solar array was added on the roof of the bus as well as a shore power connector. The shore power connection allowed the loads to run off of a building if possible and allowed for the batteries to charge between events.

As a backup, Simplicity Air added an Onan 6000-watt generator that was also tied into the Magnum inverter. The generator would start if the power could not be maintained by the batteries and solar.

It wasn’t always smooth sailing; the challenge here was that this had never been done before by Simplicity Air or anyone at HSR. After some trial and error, it became known that the main function of the HSR bus would involve keeping its doors open and the heating just wasn’t enough. Simplicity Air then installed an Eberspaecher D8 Air Heater to provide a better heating source for the HSR bus. This addition has since been effective in keeping the heat in while the bus doors are open.

This was an electrical venture like no other for Simplicity Air and the company was pleased to have played a role in this project. Today the HSR bus is being repurposed once again to provide Covid-19 vaccinations across the City of Hamilton.